FRI proposed to strengthen the local radio capacities and agricultural content that is broadcasted to the farmers at critical stages of agricultural production. FRI worked with other consortium partners that have developed content for farmer training to package the content for radio as well as to identify local agriculture experts for question-and-answer sessions. FRI proposed to strengthen the capacity of radio stations and key stakeholder groups to plan, deliver, monitor & manage quality interactive rural radio (IRR) programming to deliver knowledge on technologies for increased crop productivity and resilience as well as knowledge on inputs and markets across the value chain.

The standard OECD-DAC criteria were considered in this Endline evaluation. The evaluation questions were developed by using the following criteria:

Difference-in-Differences (DID) analysis was used to analyze data from a non-equivalent comparison group and compare the endline to the baseline to make a causal inference about an independent variable. 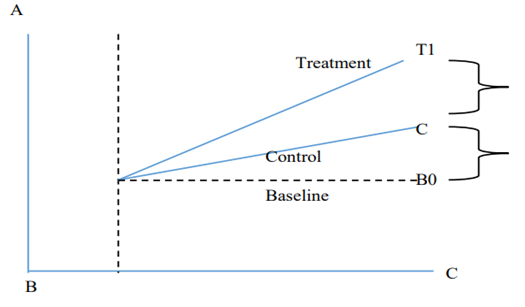 The project targeted listeners of agricultural related programs which educated farmers on farm related activities such as the use of fertilizers, weather forecast and planting methods, etc.

The mixed method of data collection was used where 240 listeners and non-listeners were interviewed in the Northern region and 162 in the Bono East region as quantitative data was collected using the Kobo Collect software. In relation to the qualitative data, Agricultural extension officers were interviewed as key informants and also Focus Group Discussions were conducted in each district.

The activities the team carried out were;